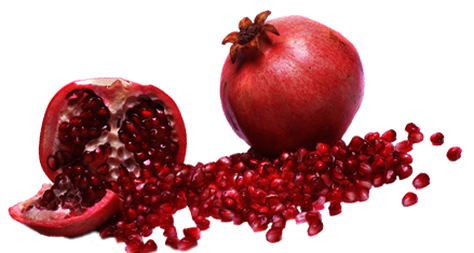 For Armenians the pomegranate is one of the most recognizable symbols of the country.  In Armenian mythology it symbolizes fertility and good fortune. It was a guardian against the evil eye. At weddings in Western Armenia, a bride would throw a pomegranate and break it into pieces. Its scattered seeds ensured that the bride would bear children. In Van, Armenian women who wanted to have a son would eat bread made from dough mixed with pomegranate seeds. Its importance is attested in historical Armenian manuscripts and stone carvings where it was used as a popular ornament. One of the most iconic Armenian art movies is that of Sergey Paradjanov named “The Color of Pomegranates”. In the film, the red pomegranate on a table with its wrinkled skin and fresh pulp stands out as an embodiment of the invincible soul of Armenia. Until the very day pomegranate is a commonly used theme in Armenian art and culture including cuisine. In fact, it has turned into a national cliché. Go to any art exhibition, and you’re sure to see two or three (or more) paintings where the pomegranate is featured. Souvenir shops are filled with ceramic, metal, and textile pomegranates and pomegranate-shaped knick-knacks. During weddings in Yerevan a small dried pomegranate called taratosik is given by a bride to unmarried guests as a blessing. After the horrid events of the Armenian Genocide many Armenian artists have used pomegranates as a theme in their lyrics and poems to describe a wide range of emotions, from suffering to hope, rebirth and survival of a nation.
In closing I would like to recite a traditional ending for Armenian fairy tales:

“Three pomegranates fell down from heaven: One for the story teller, one for the listener, and one for the whole world.”