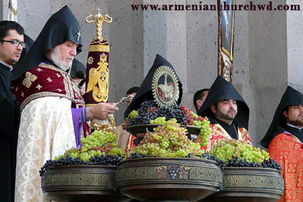 The Blessing of the Grapes
A long time ago in Armenia, a solemn ceremony took place every August in the vineyards, where the priest would walk in a procession carrying a pair of scissors in his right hand, and a cross in his left hand, and he would bless the vineyard and the grapes. After the ceremony, best wishes were exchanged among the parishioners for increased bounty. It was also customary to set aside a portion for the birds as well, for whom the grapes were hung from high perches, such as a lamppost or a stone monument.
Mid August was the beginning of harvest time, a time of rebirth and regeneration. The priest would ask God to bless the vines on which the grapes ripened, and would beseech Him to save the vineyards from evil in the form of hail, frost, high winds, and harmful insects.
This annual ritual had been repeated every year since the early settling of Armenia, much before Armenia accepted Christianity as its official religion in 301A.D. It was customary for all religions at that time to present the first fruits and nuts to the temple, so they would be blessed and then distributed by the pagan priests. 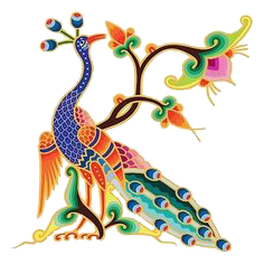 This was also the custom among the Israelites. They used to take the first harvest to the temple, after having collected and categorized the grapes in baskets and trays. According to established tradition, the harvest gifts included wheat, barley, grapes, figs, pomegranates, olives and honey.
In Armenia, during the period before Christianity, the same customs prevailed. During the New Year celebrations, the Gods, especially the ones who were responsible for a bountiful harvest and new fruits, received from the faithful gifts of fruits and nuts.
Jesus usually likened himself to a grapevine. At the Last Supper, Jesus drank wine, and gave it to his disciples by saying, " This is my blood." Wine was made from grapes, and it became the suitable choice for a fruit to be presented to church. With this reasoning, during pagan times the donation of fruits and nuts "The feast of the fruits and nuts" was transformed in Christian times into the feast of transfiguration and the feast of the Mother of God. In other religions it is still customary that the fruits are put in a tray, brought and put at the table next to the altar, so that the priest would bless them along with blessing the parishioners who presented them. Some parishioners preferred to donate fruits like pomegranate, quince, and grapes. During weddings, they would present trays of pomegranates and eggs. The pomegranate was a symbol of growth and abundance, while eggs symbolized life and rebirth. 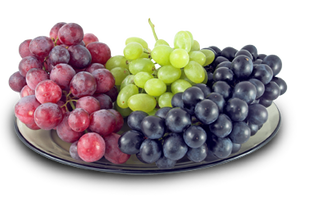 At the beginning of the Christian era, the faithful brought bread, wine, honey, milk, birds, animals, vegetables and nuts, so that they would see them blessed, and would share them with others. Later, the apostolic order indicated that only bread and wine were allowed on the table. "Send the other dried fruits to the homes of the bishop and priests, and not the table. They will distribute them to the deacons and others."  "If one of the bishops or elders of the church takes anything to the table that is not allowed, such as honey or milk, instead of wine, chicken or other animals, that person may be disciplined. But according to availability in the season, grapes for the table, as well as olive oil and incense for the liturgy, is allowed." Some of the ancient Armenian customs were transferred to the Armenian Church, since the Armenians could not forget their long-standing customs. The church would then incorporate and make official these ancient rites, and this is how the blessing of the grapes became part of the Armenian Church's Celebrations.